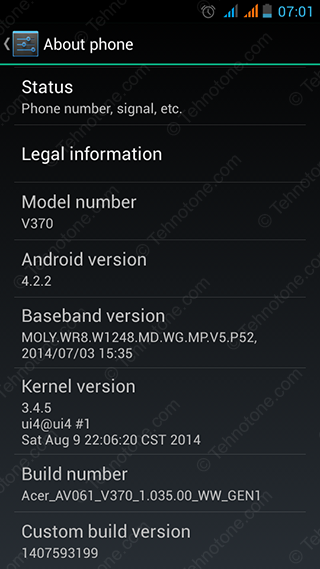 In order to update you Acer V370 device to the latest version of firmware which is build number Acer_AV061_V370_1.035.00_WW_GEN1. you have the following three methods. Try them in order and stop after you have succeeded to update.

Before updating your Acer phone, as a precaution measure against data loss, you should backup you apps data – savegames contacts, etc. To make the backups directly on your MicroSD card you could use Titanium Backup if you device is rooted. The Acer backup and restore app might not do the trick between different firmware versions (at least this is what I have discovered). You could also manually backup / export or sync online some elements for future restoration.

Method I: Make an OTA (Over The Air) update from the Acer server

There could be a number of reasons for which this process can fail. Generally if the OTA update fails to install, you will be prompted with an error message in the recovery menu. You might restart the phone to get back to the state before the update. This is also the case if you have a custom ROM/recovery like ClockworkMod recovery which is different from the factory recovery, the one that can properly handle the OTA update script from Acer. If you previously install a custom ROM please go directly to Method III.

Copy the *.zip file below (after you extract it form parts) on your MicroSD card either by USB data Cable while the phone is ON (with the card in it) or remove the MicroSD card from the phone and connect it to the computer via a USB card reader or adapter:

This update file from Acer website is for both Single Sim and Dual Sim versions of the phone.

Copy the *.zip file as it is on the root of the MicroSD card (that is at the same level where all folders are, like DCIM, Music, Pictures)
You might rename the update file to something like ”update.zip” (I assume you see file extensions)

Reboot your phone into recovery mode (MicroSD card inside, update.zip on the card, no cable left connected, 50% or more battery):

Turn OFF your Acer phone, wait for the complete shutdown vibration, then start the phone by keeping the VolumeUP button pressed. Press VolumeUP again to select [Recovery Mode]. To enter press VolumeDOWN. There, in that small menu, there is also [Fastboot Mode] which is starting a USB communication interface for PC-USB transfers before boot, and [Normal Mode] which will start the phone as usual…You will see the picture of an green adroid in the center of the screen and the text “No command.” To actually see the hidden recovery menu press the POWER button again once. Use the VolumeDOWN button for menu navigation and the VolumeUP button to make selections.

The update will start to install. Give it time to complete.
Afterwards delete the update file from you MicroSD card to free up space.

However, if this method does not work for you, as there could be many reasons, you must start over fresh with your Acer, by first installing an older factory firmware and afterwards the update package as described above at Method II. To do so, please read the following:

Method III: Full internal memory flash and then apply the update from the MicroSD card

For this you need to update your Acer by a special PC software called SP Flash Tool. This method will also resolve any other software issue (bricked device) that you might have as the entire internal memory of the device will be reconstructed. As this phone is a MTK 6589 device please read the following publication to see how this works:

Download the software and the drivers required for your windows PC:

If you are on a 64 bit Windows you might need to manually disable the driver signature enforcement before you can install the MTK drivers required for flashing.

Flash you Acer device (read the publication above to understand how). After the phone has booted back up, follow the Method II and apply the update to latest firmware version. Method II should work now as the internal memory has been re-written. If still, it does not work, you might re-download the update file from Method II and follow the steps from there again, from the beginning.