Example of a MediaTek Chipset on a PCB

This procedure apples to your  MT65xx device if:

1. Shut down your MT65xx device and wait until it vibrates and all lights are off.
2. Remove the back cover of the device and take out the battery pack from the device.

During the interventions that I’ll describe on this page, every time you connect your MT65xx device to your PC you will need to make sure that it is turned off, or, if it’s possible, it has the battery pack taken out. The procedures described below will work by putting your MT65xx device in Download Mode, a state in which the Flash Memory can be formatted and reprogrammed.

The flash memory holds all the binary information required for the MT65xx device to boot up and function. (The flash memory also contains the internal memory of the device, holding up drivers, applications and other types of data in memory structures like ROM (Read Only Memory) & NVRAM (Non-Volatile Random Access Memory). The flash memory of MT65xx devices with an unlocked boot loader can be reprogrammed in a way that a software (SP Flash Tool – SmartPhone Flash Tool for example) can write data to it between specific points (also known as memory blocks). Example: between 0x0 and 0x600000. These points in memory are contained in a file whose name includes “scatter”, file which must be loaded in the SP Flash Tool. Based on this file, the software will then look for the required components in the same directory in which the “scatter” file resides, listing them afterwards.

If you can not remove the battery from  your device (if it’s a tablet for example) you only need to shut down the device in a normal manner, or, if that’s not possible, do a forced shut down by holding down the power button for about 10 seconds, until all lights are off. (I know that  my own MediaTek 6589 device – Acer Liquid E2 Duo Dual SIM, has a LED indicator near the top, but other devices for which this guide could apply might not have such an indicator).

The notification LED on the MT65xx device (if there is one) must light up in a deep blue color as soon as you connect it to the PC. If your device was alive before you removed the battery or shut it down (I mean not bricked), In the Device Manager window  the unknown device “MT65xx Preloader” should show up.

Normally You’ve only got about 5 seconds to right-click the unknown device in the Device Manager window and then to update the driver. After 5 seconds the MT65xx device will automatically close the communication interface and the “MT65xx Preloader” will be gone until next time you connect your MT65xx device to the PC.

6. Right-click the “MT65xx Preloader” from the Device Manager window and click “Update driver software”. Use the second option to manually install the driver by indicating the driver directory.
7. Browse to the extracted folder “MT65xx Drivers” and select the folder corresponding to the version of Microsoft Windows that you are running. Click “Next” and the driver should now be installing…

The MT65xx device will keep the communication interface alive longer (as long as required) if it detects a data flow from the PC (Example: from SP Flash Tool). That is of course if you got the driver named “MediaTek PreLoader USB VCOM Port (COMx)“  installed and showing up under “Ports (COM & LPT)“ in the Device Manager window, as soon as you connect your device to the PC. This also means that the device driver that you have installed at Step 7 was correctly recognized. In normal circumstances, with the battery pack inside, the Integrated Circuit within the MT65xx device will begin to charge the battery after 5 seconds.

What if our MT65xx device has got the wrong preloader? Here we go…

For the record, I will consider the MT65xx device as being recoverable through this procedure in that case in which there still is an interaction with the Device Manager on the Windows PC when you connect the MT65xx device without the battery pack if possible, via USB and the blue light turns ON (if the notification LED exists).

This procedure apples to your MT65xx device if: 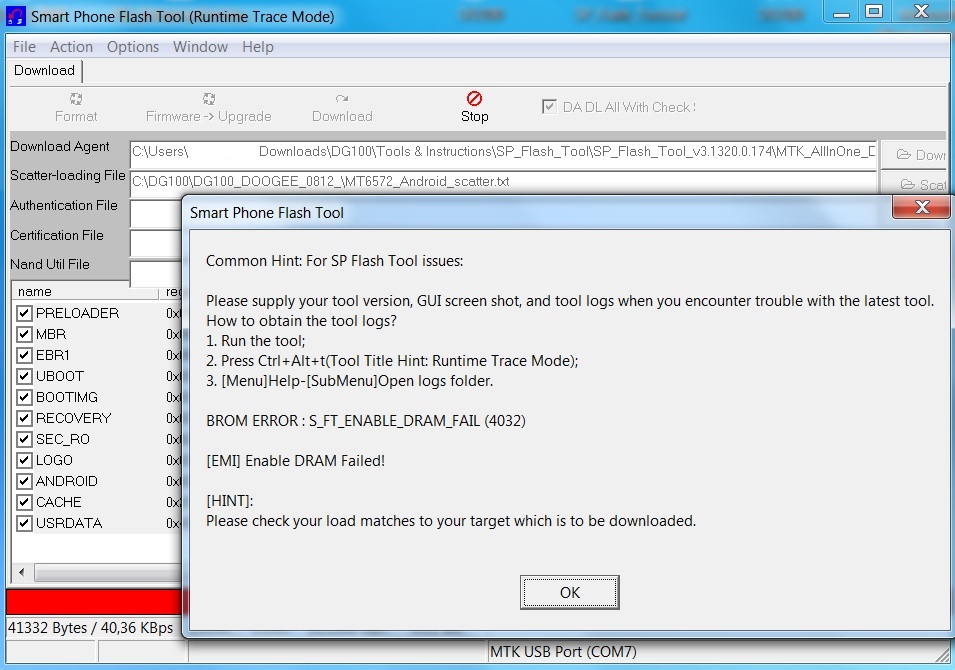 A, B and C are cases in which most likely you previously downloaded a bad or corrupt “PRELOADER” firmware component to your MT65xx device via SP Flash Tool. To get the right idea you might want to read below:

The SP Flash Tool can also handle this low-layer interface. However, the SP Flash Tool can only use this low-layer download interface to replace the “PRELOADER” component of the firmware. Afterwards, with the correct “PRELOADER” firmware component, the MT65xx device will instantly reinitialize its related Integrated Circuits, switching to the normal “MediaTek PreLoader” download interface that will take in the rest of the firmware components sent by SP Flash Tool. Your device will NOT remain dead if you follow this trough.

In this case, initially, the PC could show an “Unknown Device” in Device Manager window, then it might automatically install a driver from Windows Update, most likely THE WRONG DRIVER. If this is the case, you must then manually force-update the driver for the low-layer download interface of the MT65xx device.

In my case, Microsoft Windows 7 64 bit wrongly installed the low-layer download interface of my MT65xx device as a “Alcatel Single RNDIS Interface” under “Network adapters“. The device is sometimes with an exclamation mark and it disconnects regularly being unable to start. That was because my PC was set to automatically search for drivers at Windows Update for all the new connected devices, so I expected this to happen. A simple method to avoid this scenario is to disconnect the PC from the internet before connecting the MT65xx device to that PC via USB. Otherwise you might have a hard time finding the device in the Device Manager window. depending upon the exact model of your MT65xx device and the operating system on your PC.

But if the bad has happened I had to right-click the suspicious device, select “Update driver software“, then browse the extracted “MT65xx Drivers” folder. In my case, in which a wrong driver was already installed for the low-layer download interface of my MT65xx device, I had to select the second option, to manually browse for the driver (Select it from a list from my computer) so that I can force-replace the wrong driver found automatically by Windows Update. So you must do if this is the case. Also you might select “Show all devices” from the device type selection window.

I clicked “Have Disk…” and browse to the “MT65xx Drivers” folder where I opened the one corresponding to my operating system, selected MDMCPQ.INF and hit “Open” then “OK“. In the window “MTK USB Port” was now shown as being installed, which is the correct low-layer download interface driver that I wanted to have.

The point is that, when you connect the device with no battery inside or turned off and the blue light comes on, in the Device Manager Window you must have one of this two devices showing up under “Ports (COM & LPT)“:

If you have trouble installing a new MTK driver in your system or you see a high or unusual number beside COM Ports displayed in the Device Manager, you might want to clean the USB driver garbage in your system with USBDeview – Download USBDeview for 32 & 64 bit Windows – learn what it does and how to get rid of unwanted USB drivers and COM Port duplicates.